The trains began arriving every three or four hours from the camp´s each one with several hundred men. Each new arrival was a thrill with the band playing "Hail, Hail the Gang's All Here" and the sailors and marines on the platform cheering. It was an experience to see the somewhat bewildered expressions of the men on the trains change to tears, smiles and laughter as they realized that they had reached the end of the road - that the day, the longing for which had sustained them through months and years of torture and mistreatment, was at hand. Torvald was among this men and was still alive. 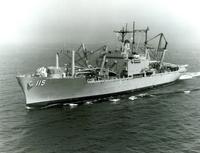 Mobile where Torvald was sent onboard to, departed Okinawa 9 September and operated in support of our mine-sweeping forces off the western coast of Kyushu until the morning of 14 September when she entered Nagasaki harbor and anchored. The following day Mobile embarked liberated Allied prisoners of war and took them to Hagushi, Okinawa, for further transportation to their homes.

Before this the P.O.W was checked out onboard the hospital ship "Haven"

Rear Admiral W. H. P. Blandy and his staff came aboard and, flying his flag, Mobile immediately returned to Nagasaki. Another group of 500 liberated prisoners of war were embarked for transportation to Okinawa. The ship arrived at Okinawa on the evening of 22 September, where Rear Admiral Blandy hauled down his flag and disembarked.

The following morning the liberated prisoners of war disembarked at Machinat and after partial logistic requirements were met, Mobile awaited orders for a return to sea.

On the 27th Mobile returned to Empire waters, remaining in the Sasebo-Nagasaki area until detachment from the western Japan Force in November.

The ship was then assigned to Task Group 16.12 (Rear Adm. R. S. Kendall, USN) for duty in Magic Carpet operations. Accordingly, on the 812 [sic] naval and marine corps separatees reported aboard for passage, and the ship departed Sasebo - destination San Francisco, California. Orders received enroute ordered Mobile to San Diego, and after a 15 day cruise, Mobile arrived in San Diego Harbor on 2 December, while a brass band and a cheering throng provided a fitting reception for passengers and crew alike.